Clear skies and fresh snow brought very cold temperatures yesterday
morning. A record low temperature of -4 degrees was set at Riverton
WY yesterday. This breaks the old record of 1 set in 2000. Note the
records for the Riverton site only date back to 1995.

The record low temperature at the cooperative observer site in
Riverton for November 21st is -24 degrees… which was set in 1977.”

Obviously, this is weather.  It’s also a great example of using very limited data (20 years) when proclaiming hottest or coldest.  Climate is generally considered to be calculated in 30 year intervals.  Which interval of 30 years varies.  One would think it would be 30 years back from the day the record was set.  Actually, it’s generally not.  One can also use the average for the 20th century, the average for all years for which we have instrumental records, etc.  Which average is used affects the amount of warming.

The latest example of confusing weather and climate was the December warm weather along the East coast.  The media was publishing pictures of mail carriers in shorts.  It was a very warm December.  Then January came and the blizzard hit.  Suddenly it became very apparent it was a warm December in terms of weather but the climate may or may not have changed.  Snow returned, perhaps just a bit later than last year.  There is, of course, no law in nature that snow must start at the same time each year or fall in the same amount each year.  Natural variability exists.  Yet each time there is warm weather, the media jumps on this a being “global warming” and ignores snow.  Neither a hot summer or a cold winter proves anything except weather is variable.  No matter how many times the media tries to sell the lie, it can never be the truth.

Found this on a climate blog:

“Can you imagine disastrous storms like Hurricane Katrina becoming increasingly frequent and possibly more devastating? What about the entirety of Manhattan being permanently submerged? These are two of many possible outcomes of unchecked global warming, according to Steve Sawyer, a climate policy official at a UN climate change conference.”

The use of the word “imagine” is quite appropriate here.  The quote is 7 years old and hurricanes are at one of the lowest levels in recent decades.  REAL scientists (note the speaker is a “climate policy official, not a scientist) say Manhattan might be submerged in something like 500 years or so IF the upward trend is properly calculated and continues and all of the factors estimated in the models are a close match to actual contributing factors, which is, to put it bluntly, highly unlikely.  It’s all imaginary goblins being sold to people in an attempt to give more money to third world countries for the alleged damage the US has made concerning global warming.  It’s an attempt to stop people from using fossil fuels and having a comfortable life.  It’s an attempt to punish developed countries for their success.  None of the predictions of gloom and doom have materialized.

Weather is just as it always has been—variable throughout the globe and throughout the seasons.  It is not changing any more than it did in the past.  The globe itself may be holding more heat in, but we don’t know why and we don’t know how much.  It’s all speculation with the aid of a computer.

“Having the reality of the destructive forces presented by climate change fully register with people, so they will to act with the needed urgency, is indeed a challenge. And, while the physical and environmental effects of global warming are studied and described, what has rarely been addressed, and is as compelling a topic as any, are the psychological impacts.”
National Wildlife Federation 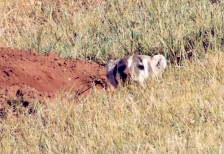 Call me when it’s safe out there.